Joined Aug 19, 2010
·
71 Posts
So I replaced the weatherstripping on the trunk of my 1970 coupe but somehow some water still comes in. I assume this isn't normal; does anyone have any ideas of what I can to do prevent/stop water from coming into my trunk?

thank you for any help!

Joined Sep 21, 2009
·
3,813 Posts
Did you replace the weatherstripping properly? It dies take a bit for it to settle and form. Also, it may not be leaking from the trunk but maybe the rear window (hopefully not).
► Show Full Signature
1968 Mustang coupe 5.0/T5 Build Thread
1968 Mustang fastback 351w/C4 Fastback Build 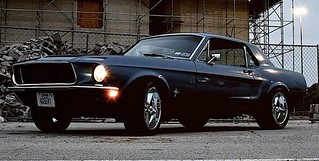 Joined Aug 19, 2010
·
71 Posts
I had the back window seal replaced but it still leaks (just not as much). When I last washed my car, I noticed a little puddle on the rear deck lid. When I open the trunk I noticed two small puddles on either side of the trunk. The new trunk weatherstripping has been on for at least 3 months. I am so beyond frustrated! I was told that when they made mustangs in the 70's, the bodies weren't built as exact as they are today and that possibly the rear window moldings may not be correct which is why the rear window leaks despite new weatherstripping. I was told that it will require some metal and body work to correct it. But I don't have that kind of $$$ right now. Could I just use silicone for the rear window (in the spot that its leaking from)?

Joined Dec 18, 2015
·
65 Posts
jump inside with flash light and have someone start spraying it down.
Another good way is a spray bottle of soapy water. roll up windows turn heater fan on hi and close all doors and windows.
start spraying soapy water over seems and weather stripping.
Problem areas will bubble.
► Show Full Signature
1999 MUSTANG GT COUPE DARK SATIN GREEN,
VORTECH V2 TREADSTONE FMIC
A

I had to do that. Mine is still the window. Both front and rear are leaking on mine.
► Show Full Signature