Went to a car show last week. Due to the heat there was about 30 cars...and more than 30 trophies. Thought I had a good shot. There were 4 cars in my class, and they gave trophies for 1st, 2nd and 3rd. Guess who went home empty handed, losing out to a stock 1985 Silverado? Even got **** talked by the judges about the exterior and broken trunk struts. At least I got 3 points for having a fire extinguisher, 1 point for being a daily driver, 1 point for interior, and 1 point for the engine for a grand total of 6 points, including a 0 for the exterior. I didn't see any other cars get a 0 for anything. So...par for the course on the car I guess. They don't call it a dumpsterfire for nothing.

On to the more fun stuff. Romped on it some more. She pulls hard, but not as hard as I'd like. This time giving it 75% throttle I made 10psi at 4000 RPM, still short of what it should be making. Airflow and load data match up to what I saw; still short of what it should be making, maybe around 425hp, 1.45 load vs the 500hp and 1.9X load it should see. I also did a quick 1st-2nd pull. It pulled hard, enough to lock up the seat belts and pop some of the gauges out, but didn't even register boost. I doubt the 300hp NA version would do that.

I know the turbos are making their 5psi by 2500 RPM at 50% throttle from the previous test. Boost climbs with RPM. It should spike up to 8psi from the blower right away and then climb like a rocket as the turbos spool. The question is why. Could the blower have an issue with achieving its pressure ratio? Is it just not behaving like an ideal compressor? I don't think it's completely off since the turbos light way faster than they should on their own, and it makes more than 5psi total. Is the boost gauge off? You know I calibrated it before.

I've got plenty of levers to crank the boost up if need be. Going to a smaller pulley will do it, but will create more heat. I could switch the boost reference for the wastegates to the manifold and command them to 15psi regardless of what the blower does. Just a matter of turning her up if need be.

I'll try to get some pictures and video up this week, even if it isn't at full power.
► Show Full Signature

Joined Aug 24, 2010
·
21,891 Posts
Switched around the bypass valve reference. Seemed to help a little, but not a ton. Easier to break the tires loose in 1st. One blip of the throttle did it at one point. Then today I rolled into it, and when the turbos lit, it knocked them loose. Still not seeing the full 15psi on the gauge I want, but it does hit pretty hard.

I'm going to switch the wastegate references. Right now they're set at 5psi and relying on the blower's 1.56 pressure ratio to get to the full 15. I thought it would better keep me from overboosting, but it might be holding me back. I checked with another guy running a similar compound setup and he's referencing the manifold. It looks like I'm going to try that route and see if it gets me the full 15 I want.

But here's the juicy stuff, even if it was only 3/4 throttle and not making full boost. Still sounds pretty decent, even if it doesn't capture how it felt.

Sliced my hands to ribbons changing up the boost reference lines to the wastegates. Rather than 5psi pre-throttle they're set to 15psi at the manifold. And to make sure I taped a known good pressure gauge to the column to see what it would do with the configuration.

Well hot damn does it make 15psi now. Didn't get to see how fast it was with keeping my eyes on the pressure gauge and wideband, but it sure performs. Didn't get video of it just yet.

The shutdown didn't go quite as well. After letting out the wideband gave me an error, and the engine sounded like dogshit. Uh oh. As the car slowed down it sounded awful, and loud. I had a bad feeling, but there was no smoke, no faults, no vibration, and with how it sounded I had a feeling it was an exhaust leak. Either way, I cut the testing session short and limped it back home, getting dirty looks the whole way for this car that sounds like...well, a straight piped V6. I figured one of the wastegates or something came loose, something that I touched yesterday, but when I parked it, it was pretty obvious where the issue was, and wasn't something I messed with.

Just one of the slip fit connections at the downpipe popped out. And pretty significantly. Happy it's a pretty easy fix, but surprised it blew it out that bad.

After that debacle I'm kind of glad I'm not dumping the exhaust out the bumpers. It would sound absolutely terrible. Not just volume wise, but tone. I guess that's what you get when there's a turbo four cylinder sticking out each side. uke:
► Show Full Signature

Joined May 23, 2010
·
1,439 Posts
Glad it was something simple like a down pipe slip fit coupler. Before i welded on ball and socket junctions that would happen all the time. I hate the way open down pipe turbo mustangs sound. At least single turbo mustangs anyway. I dont see how guys run them on the street.. they sound like a tractor
► Show Full Signature
Mmr900 4.75 striker. Stock heads, CMS stage 2 turbo cams, on3 67mm ball bwaring billet wheel turbo kit @12.7 psi
539 rwhp / 601 rwtq

Joined Aug 24, 2010
·
21,891 Posts
Doin' more work. Actually making 15psi this time. Starting at a 15 mph roll and lazily shifting at 5000 RPM, but it pulls hard. I'm disappointed with how it doesn't show how hard it went or how fast it got going, but you can kind of see how it picks up the nose. Might look into alternate camera angles next time as well. The downside to mounting it outside is you don't get anything for sound. I'm open to suggestions.

Joined Aug 24, 2010
·
21,891 Posts
Yeah it's a suction cup go-pro mount on the windshield. I can mount it pretty much anywhere. I've tried it on a bunch of the exterior locations, but then you just get a ton of wind noise.
► Show Full Signature

Car show where I got 6 points, placed 4th out of 4 in my class and didn't get an award where there were more awards than cars.


Bigger show where it actually got some attention


Another show where the most attention it got was two guys in Roush shirts laughing at it.


And for shits and giggles, two dumpsterfire projects

Currently working on upgrading the charging system, going with a 2ga cable direct to the fuse box. Also noticed the back light on my gauge cluster is out. But with the SVT gauges, they don't use bulbs like the GTs. They use a unique glow backlight that uses AC, and requires an inverter. When that goes out, you lose the lighting. I verified it had power to it, but it wasn't working. Not a serviceable part of course. They have a great writeup on SVTP on how to replace it.

Now with the season winding down, it's time to start looking ahead. The girlfriend has been on be about how it reflects poorly on me, how it looks like ****, that I need to make it respectable. What do I spend the winter doing? Fixing all the little **** that's wrong with it? Better paint? Cleaning up things on it? Fixing the door handles? Making it look like less of a **** heap? 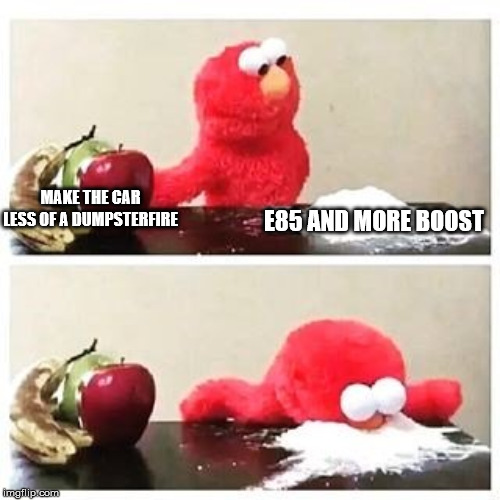 Looking at the Bosch 210 lb/hr CNG injectors, and seeing what this external fuel pump can do. It sure would be cheaper and easier to run it on E85 than try pushing it on race gas. And we all know I don't give a **** about appearances if I can put up 4 digit power. Then that will require a new wheel/tire setup I'm looking into. :baller:
► Show Full Signature